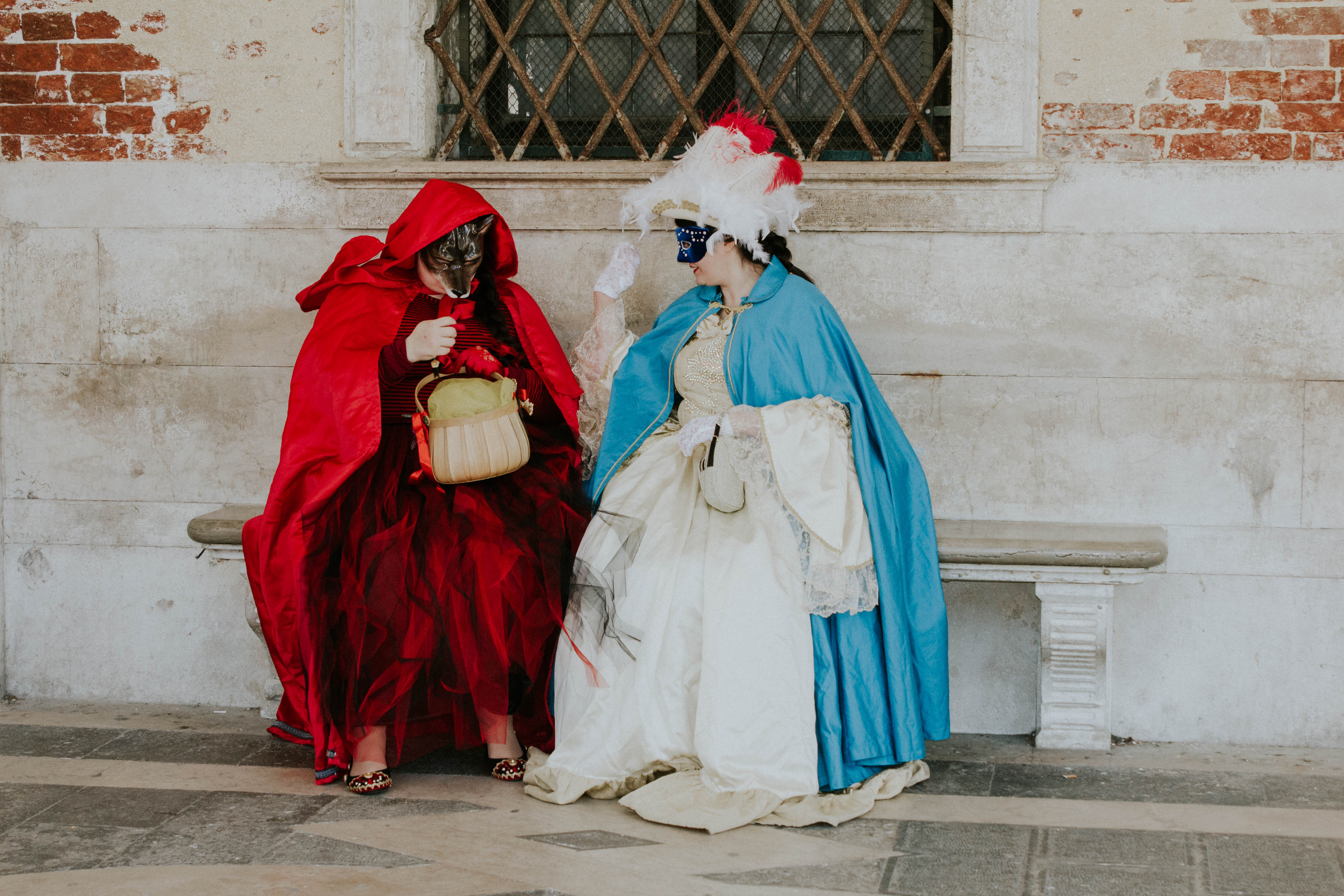 Through the eye of the average tourist, one may think that Venice only thrives off of gondola rides & Venetian masks. Although the costumes and rides are magical in their own right, you should take the alleys and bridges less taken as well. If you take a chance on getting lost down cobblestone streets and ornate bridges, Venice has much more to offer than its well-known Carnival and gondoliers. We had the opportunity of experiencing both views of Venice in just one day on our recent Explore Europe trip.

We started the day off with a lovely buffet breakfast at a hotel which was included in our ticket price of 99 € for our trip. I had a cappuccino, croissant with honey, and a large bowl of yoghurt with fresh berries and granola. We took the people mover afterwards to the city and joined our tour guides. Although we don’t usually join in on the guided tours it is included in the ticket price so it is nice to have the knowledge of a local at your fingertips. The guide told us about where to find some of the best views of the city and historical information about Venice and we had an earpiece so if we fell behind we wouldn’t miss a beat. 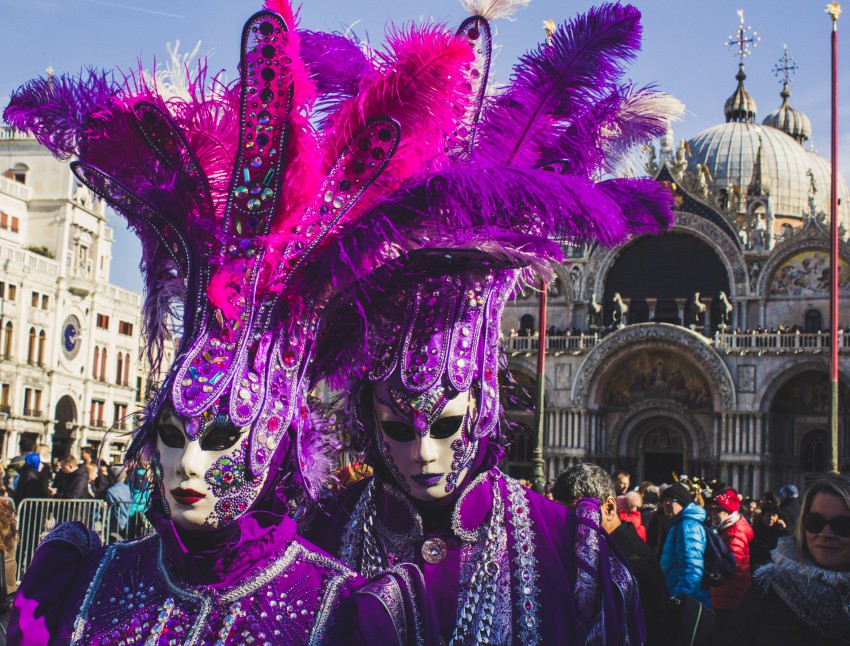 Since our bus arrived early it provided us with the opportunity to stroll through small streets on the way to Basilica di San Marco and Doge’s Palace in San Marco’s Square after the tour. Before we arrived in the square we stumbled upon Ca’ Macana which was just opening for the day. Ca’ Macana is a mask shop known for creating the masks that were used in the film, Eyes Wide Shut, and also known for recently making a mask for Nicki Minaj. We considered doing their mask designing class which teaches you the technique of your choice so you can create your own mask, but with the limited time we decided to purchase masks instead to join in on the festivity more quickly. With masks in tow, we continued to the square.

Once there we found a stage and thousands of people gazing upward at the remarkable architecture. Others were mesmerized by the hundreds of people dressed in elaborate costumes. They entertained the eyes of photographers, twirling in bejewelled Victorian dresses and matching feathered masks with the stunning Basilica as their backdrop. While wondering through the crowds we stopped to take a few photos of a gondolier sleepily rowing under the Bridge of Sigh and another on the waterfront.

Stopping at the oldest café in Europe, Florian, we waited for a few minutes under twinkling lights for our host who was also dressed to the nines. My husband and I sat among other couples, who like us, were enamoured by the gilded ceiling and filigree hanging mirrors. Enjoying a light meal and a nice view of the square from our window we ordered an iced coffee, Florian coffee, English scones, and toast Florian for lunch.

After lunch, we departed the square for a quieter route. On occasion, we would pass a couple or a rowdy group excited for the day making their way through the streets in their extravagant Carnival attire. We stopped at Scala Contarini del Boval which is a spiral staircase with arguably the best views of the city for only 7 euro. Like Florian, it is Instagram-worthy in my book. 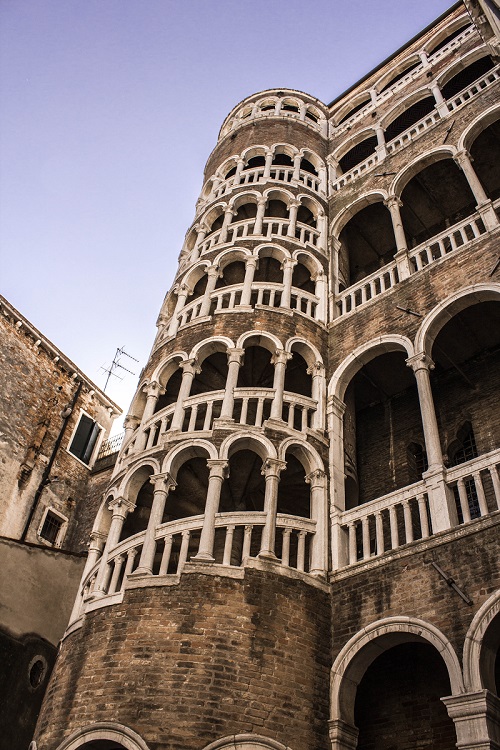 Libreria Acqua Alta is also a popular destination for photographs. Although crowded, underneath the tourists pushing their way through to get a photo posing on the staircase of books, I found gold adorned French antique cherub figurines and art which fit perfectly with my taste. If you too love old books, postcards, and wall art this is the place for you, but perhaps you can find a quieter time than late noon. 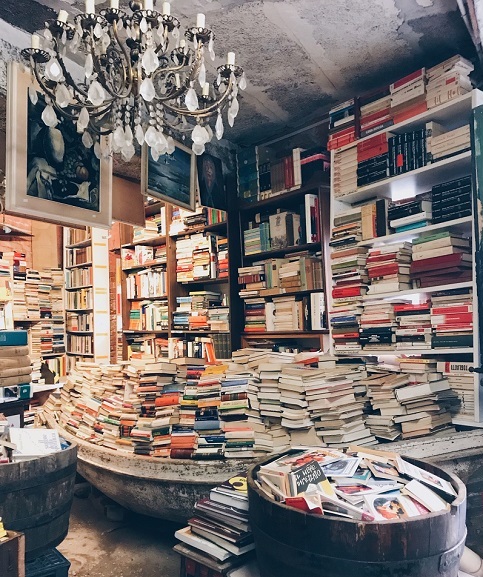 Seeking to further fulfil my love for architecture we wondered over to Ca’ d’Oro which is called the Golden House because it was once embellished with gilt décor upon its walls. It is now a museum. We only crossed paths with 2-3 people for the hour we spent there. This is also where you will find my favourite views of the Grand Canal. From the balcony, our view was of the sun shining brightly as we gazed upon gondoliers rowing by and people bustling down the street.

After taking a moment to appreciate the Grand Canal, we headed to Ostaria dai zemei where we each ordered 6 Cicchetti of various kinds for dinner along with two glasses of the popular Aperol spritz. The Cicchetti are to die for and are similar to tapas like in Spain. The restaurant was packed wall to wall with cheerful locals mingling with drinks and Cicchetti in hand. People watching through the window, we ate and drank our way through Venice with the locals.

Deciding to get lost a little more, we found a place called Pasta Di Giacomo Rizzo A & R. There I purchased dry pasta to take back with us along with a pasta stand and a variety of pasta styling cutters all for under 30 euro. Dessert sounded like a good idea as the sun was setting and so we strolled over to the popular spot, Suso Gelatoteca. I got the most delicious gelato which was vegan dark chocolate topped with a cherry amaretto gelato.

The two complemented each other perfectly! We stood in an alleyway where we could see locals coming home from a long day and others were stepping out of the kitchen of bakeries and restaurants for a break. Standing there wondering what their apartments were like, we ate our gelato. The sun had gone down by the time we finished so we chose to take a gondola ride under the twinkling stars. Our gondolier took us by city hall, a 7-star hotel that George Clooney had his wedding in, and he stopped by the famous Rialto Bridge. 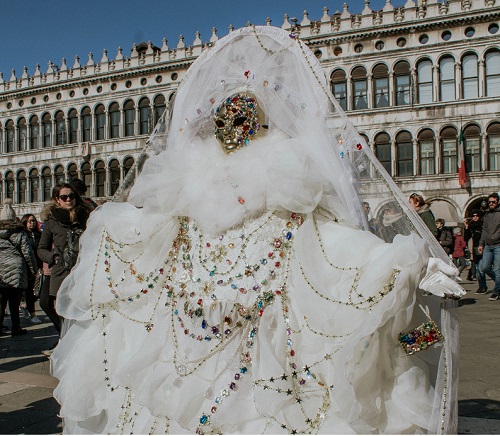 With the water glistening from the lights of the bridge and the city sounds dying down, it was truly magical. As we approached the end of our ride we could hear someone playing music on an accordion which was the perfect ending to our time in Venice.

Have you ever visited Venice during Carnival? Tell us about it in the comments below!