Guinness, Greenery and Great Craic: 8 Things to Do in Ireland

Ireland is a country whose myriad stereotypes strike familiarity into the heart of all. Quaint pubs, sweeping greenery and warm people are synonymous with the Emerald Isle, and with good reason. However, one must be weary of relying on tropes to characterize this deeply complex, ancient and regenerating country. This is a land of immeasurable beauty, tangible spirituality and fascinating history. Welcome to Ireland! 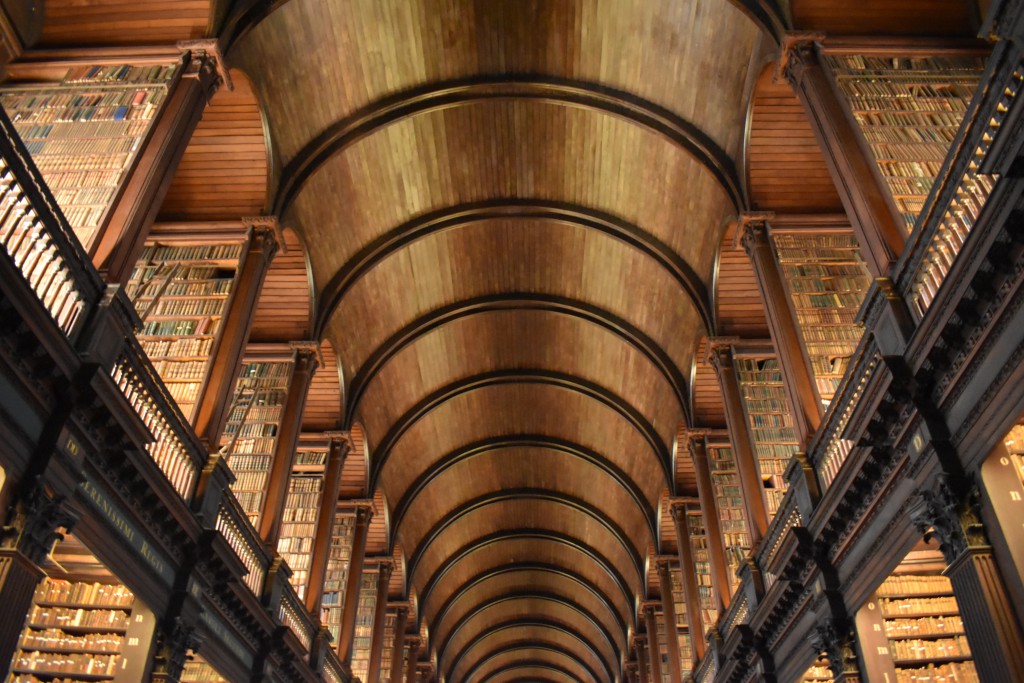 Ireland is a country of thinkers, poets and writers, with some of the best and most sophisticated literature in the world. It makes sense, then, that one of our top recommendations of things to see in Ireland is a library. Trinity College is one of Ireland’s oldest and most prestigious universities, and its Old Library wouldn’t look out of place in a Harry Potter movie (and with good reason – it was the likely inspiration for Hogwarts’s Library). Walk through the cobbled streets of the university and you will find this 18th century building, as magnificent as it was three centuries ago, although now luckily open to visitors.

The pièce de résistance of Trinity’s Old Library is its barrel-ceiling Long Room; consisting of a 200 foot walkway lined with marble busts of famous philosophers and writers. The room is also home to the famous Book of Kells, a 9th century gospel manuscript though to be one of the most important pieces of ancient European literature, as well as over 200,000 of the country’s oldest books. The Long Room’s collection also features a rare copy of the 1916 Proclamation of the Irish Republic, accessed by request. For literature or history lovers, this is an attraction not to be missed! 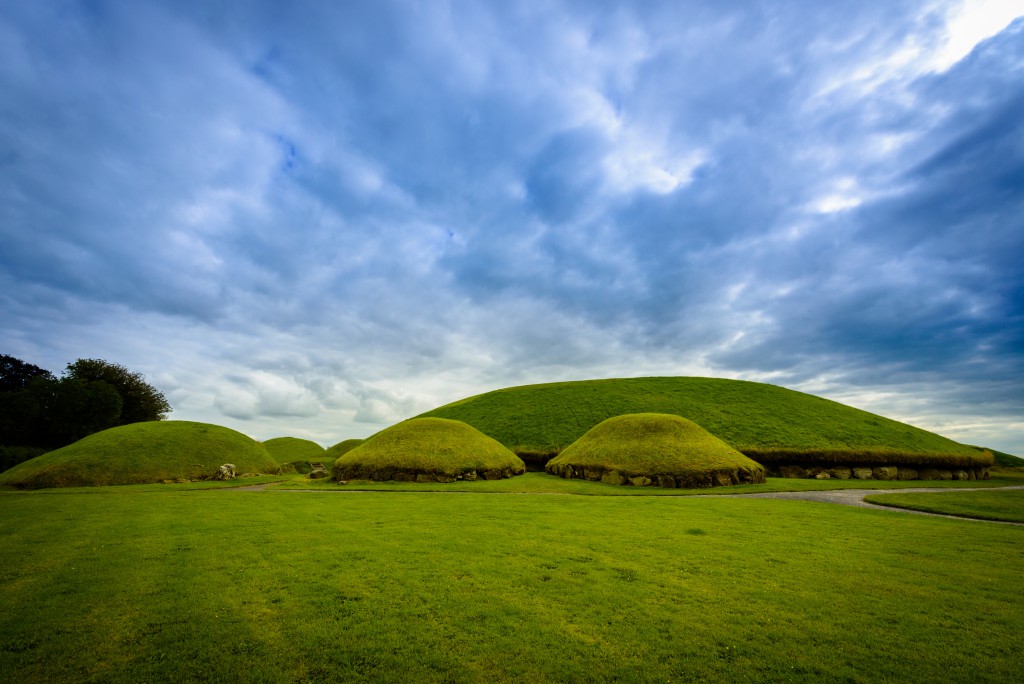 The mind-bending Brú na Bóinne, also known as Bend of the Boyne, is one of Ireland’s most enthralling sites. This megalithic site predates even the Egyptions, and is a testament to Ireland’s sophisticated ancient people. This unbelievable UNESCO World Heritage Site features an assortment of tombs, stones, henges and grave passes which have been amazingly preserved due to their positioning both over and underground the rich surrounding soil.

It’s hard to imagine how settlers during the 32nd century BC (yes, you read that right) could have possessed the knowledge to build something so complex and long lasting, using materials found lying around the region. However, what makes this site even more mesmerizing is that during winter solstice every year, a beam of light travels the length of the central Newgrange passage grave, across the floor. This mysterious and deeply fascinating site sees up to 200,000 people every year, making it one of Ireland’s most popular tourist destinations. 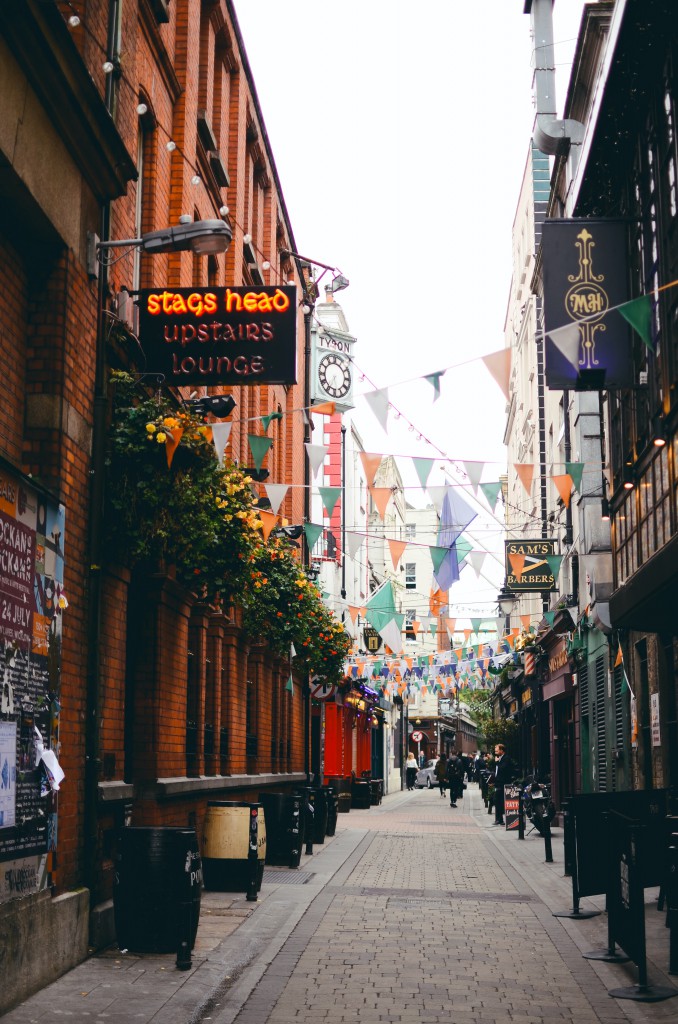 The lively bars of Dublin

There’s more to Ireland than just drinking. However, we couldn’t make a list of things to see in Ireland without mentioning Sean’s Bar; Ireland’s – and possibly the world’s – oldest existing bar! Those who knew Sean’s Bar knew it had been there for donkey’s years, but it wasn’t until renovations in the 1970’s that builders found that one of the walls was made from wattle and daub, wooden strips held together by mud and clay that signified its age was at least a millennia older than previously thought.

Soon after these findings were verified with the discovery of ancient coins dating back to 900 A.D, meaning that the pub, and the traveler inn which came and went in between, has been in the same spot for over 1,000 years! Today, this quintessential Irish pub located on the banks of the River Shannon in Athlone is the perfect place to sample the best Irish hospitality has to offer over a traditional Irish pint and maybe a packet of Tayto’s or two. 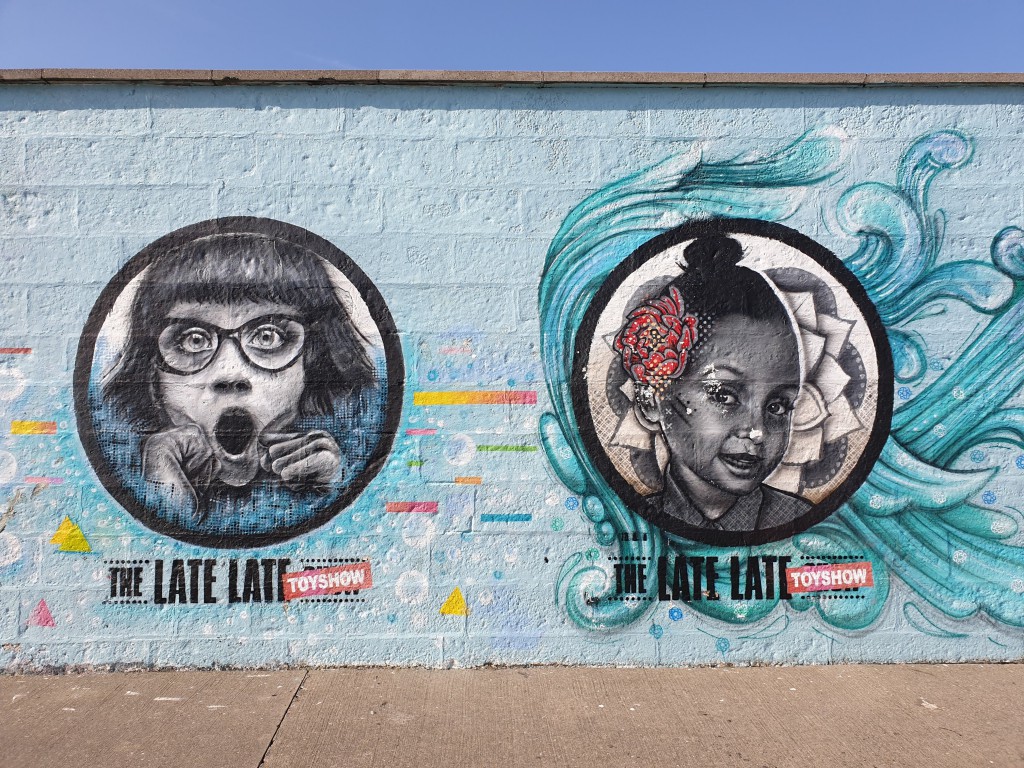 If green countryside and Guinness aren’t the first things you think of when you think of the Emerald Isle, chances are that sadly recent political unrest is. Fighting between the British backed North and Republican south has occurred for decades, but hostility in the later half of the 20th century rose to fever pitch, resulting in high-profile bombings, murders, and police brutality. Today, tensions have thankfully thawed, but for large communities in particularly Northern Island, the wounds have not yet healed.

Large, colorful and often disturbing murals commemorating martyrs on both sides, often just streets away from one another, pepper Belfast and other northern city’s working class neighborhoods. The most famous murals can be found in the areas around Shankill Road and Falls Road in Belfast, where vibrant, though often violent depictions of balaclava-clad paramilitary clutching assault rifles stare on buildings as children play and the elderly chat below. The murals are at once beautiful and disturbing, and stand as a testament to the complexity and rich, often painful history of Ireland. 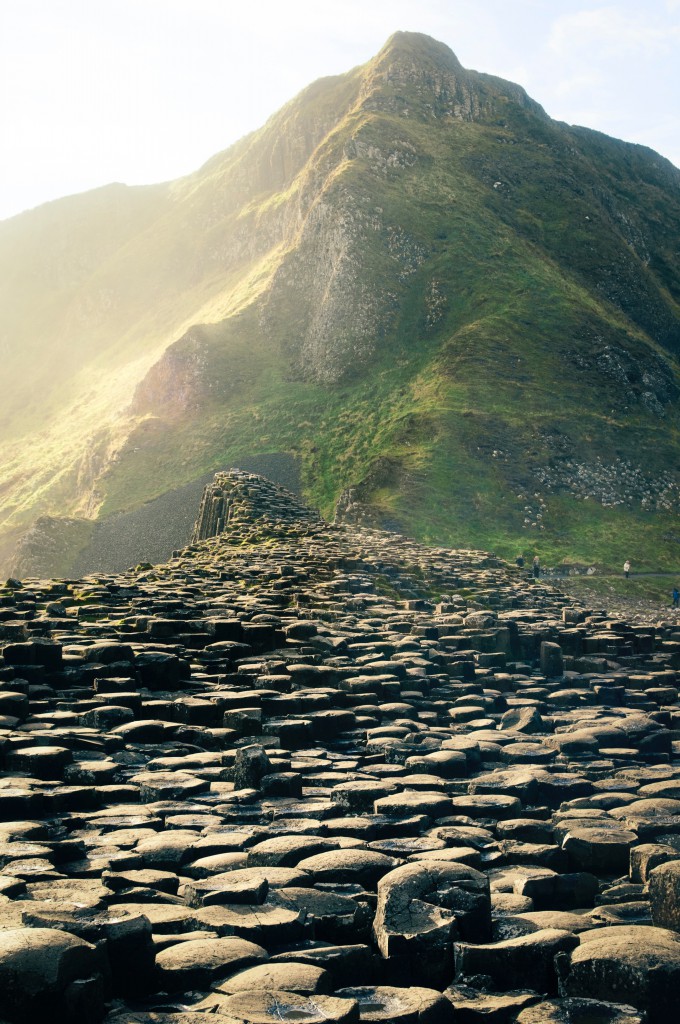 One of Ireland’s most iconic sites, Giant’s Causeway is a stunning volcanic rock formation as beautiful as it is surreal. Formed by molten lava 60 million years ago, 40,000 almost perfectly hexagonal rocks sit side by side, creating a magical walkway effect that stretches right out into the Atlantic Ocean. During a long summer sunset, Giant’s Causeway could well be one of the most beautiful places on planet earth.

Giant’s Causeway got its name from a legend about two warring giants, one from Ireland and one from nearby Scotland. These giants hated each other, and one day after a tirade of insults from both sides, the Irish giant built a causeway from Ireland to Scotland in order to show him who was boss, only for the Scottish giant to knock it down. The resulting structure was Giant’s Causeway, safe to say the most magnificent post-fight detritus in Ireland to date! 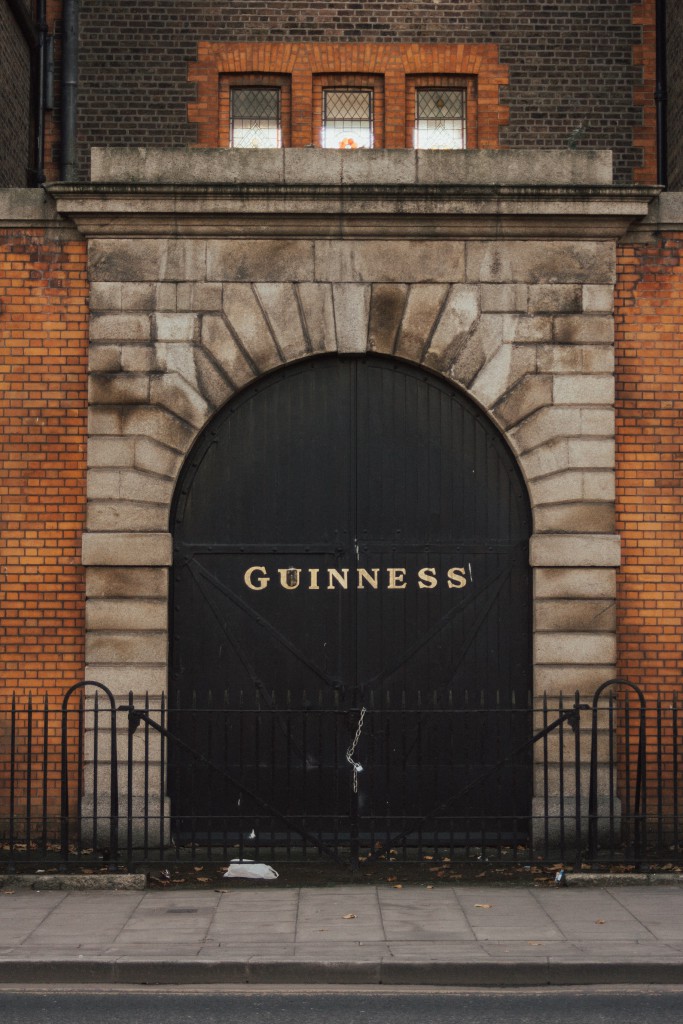 Guinness is to Ireland what espresso is to Italy, what tea is to England and what vodka is to Russia. That is to say, the nectar of life. Guinness is a thick, black stout that’s been synonymous with Ireland since its creation in 1759. Although it’s sold all over the world, it’s believed that the best, most tasty pint of Guinness comes from Ireland, as the thick, lightly carbonated liquid doesn’t travel well.

And where better to sample a pint than in this seven-floor brewery, encasing a large glass atrium shaped, magically, into an enormous pint glass. Visitors to the factory will get to experience the delicate craft of malting, fermenting and ultimately brewing the beer, as well as how they make the barrels to lock in more flavor. The tour ends with a pint of cold Guinness, poured to perfection, overlooking Dublin in the factory’s Gravity Bar.

Cliffs of Moher at sunset

The Irish often get a twinkle in their eye when discussing the Cliffs of Moher. It is a strong contender for the most beautiful site in Ireland, and one glimpse will show you why. Moody and atmospheric during dull days and positively breathtaking on a sunny one, the Cliffs of Moher are comprised of 14 kilometers of jagged cliffs, carpeted with Ireland’s iconic verdant greenery, which then drop off 200 meters into the Atlantic Ocean.

O’Brien’s Tower marks the highest point of the Cliffs of Moher and is easily reached by Doolin Village. From here, on a clear day, it’s possible to spot the Aran Islands, as well as the Twelve Pins mountain range of Galway. It’s possible to spend a whole day drinking up the incredible view, and UNESCO agrees, awarding it World Heritage Site status. 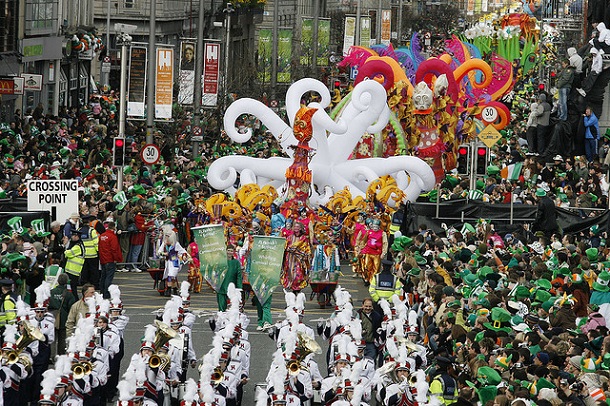 Parades in the streets of Dublin

The 17th of March is the day when everyone, all over the world, regardless of race, religion, creed or nationality, is a little bit Irish. It is a common misconception that St. Patrick’s Day isn’t celebrated in Ireland – it certainly is, particularly in Dublin, the country’s largest, most cosmopolitan city. St. Patrick’s Day commemorates the patron saint of Ireland, St. Patrick, who allegedly banished ‘snakes’ (believed to be an allegory for druids) out of Ireland. And boy, how they love him for it!

The entire country gets the day off work, as it’s a national holiday, and celebrate by throwing one hell of a party. Comparable to Mardis Gras in New Orleans, Oktoberfest in Munich, and Carnival in Rio, this party erupts in the morning and lasts all through the night, spilling into the next day (or three). The tradition is to don all of your greenest clothing and to enjoy some of the cultural events held around the city. You can try your hand at Irish dancing at the Festival Céilí, watch the many street performances, join the St. Patrick’s Day treasure hunt, or simply enjoy some delicious local brews at the Irish Craft Beer Market. The most important thing is to soak up the atmosphere and enjoy being Irish for the day with some of the funniest, warmest and kindest people in the world.

Have we convinced you? We will be heading to Ireland over the Labor Day weekend in September! We’ll take you from Frankfurt International airport via plane to the heart of the country, where we’ll spend four days and three nights in the Emerald Isle, seeing some of the country’s best highlights! Click here for more information.