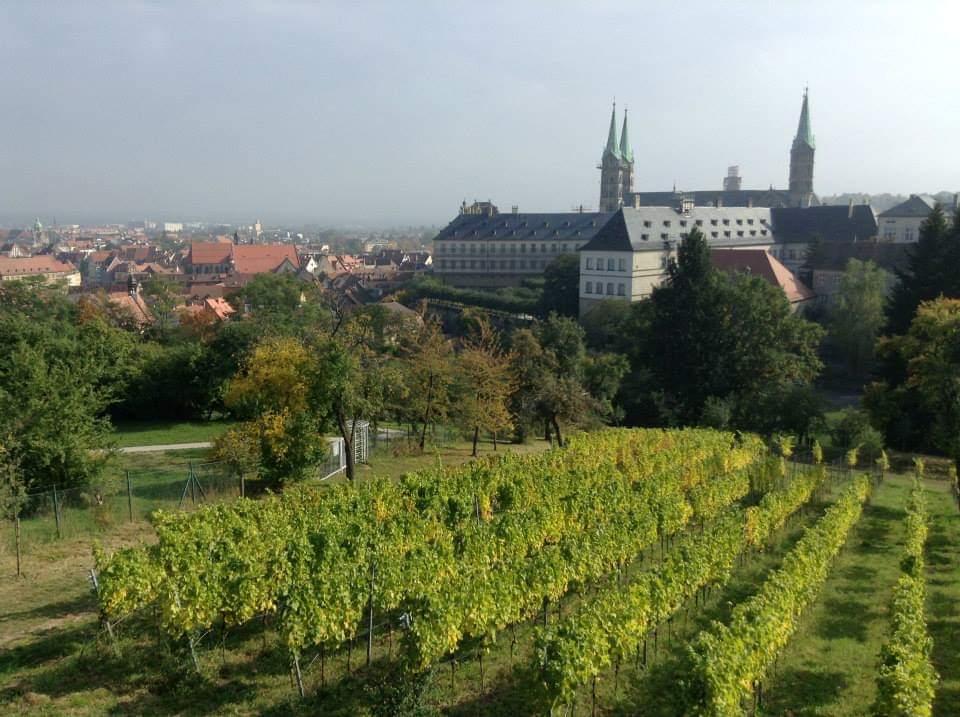 “Home is where the heart is” was already sung by Elvis Presley and there couldn’t be any more truth to a few simple words. While his love story was the one of two humans, mine is of a different kind: the love story of myself and the small town of Bamberg…the place I live and study in and the place I lost my heart to – my HOME. It’s with great pleasure that I’d like to introduce to you this gem of Upper Franconia, only about 65 miles west of Grafenwöhr. What makes it so special? Let me first introduce you to a few facts before I get all romantic…*sigh*

When the town was for the first time mentioned in an official document in the year 902, it was not much more than a fortress owned by the Babenberg family and a small settlement. A little bit of mumbling later, that said family can be held responsible for the naming.

Talking about names…two names are related to the place second to none: Henry II (emperor of the Holy Roman Empire of the German nation – quite a mouthful of a title, I know) and his wife Kunigunde, a former princess of Luxemburg. Henry founded the diocese of Bamberg in the year 1007 and lay the foundation stone for it to grow, while Kunigunde was always believed to be one of the protectors of the city. She performed some awesome miracles during her lifetime which in the end led to her canonization (same as Henry, by the way).

Well, Bamberg didn’t grow exactly big (not even 80.000 people are living there, 13.000 of which are students), but that’s just one of the charming aspects. Henry and Kunni (as she’s lovingly called) haven’t been forgotten: There are still weekly prayers held for them in the incredible cathedral which was first consecrated in the year 1237.

Maybe it was the prayers that helped with protection during World War II? While a lot of the surrounding cities, like Nuremberg or Würzburg, were largely destroyed, the damage in Bamberg was only about 4%. It counts as one of the best-preserved old towns in the whole of Germany! And today, you can still wander through narrow streets surrounded by magnificent buildings of the Middle Ages and the Baroque era. Therefore, it’s not surprising that Bamberg was added to the UNESCO world heritage list in 1993.

While – pretty much everywhere in Europe – football (I know, that you call it soccer, but I’m just a bit too European to do that, sorry 😉) is THE supported sport, in Bamberg it’s all about basketball. And guess, who’s responsible for that? The Americans! Warner Barracks was a US Army military base up until 2014. In their gymnasium the local basketball team was founded and today is one of the most successful teams of Germany. So, thanks for that! We love it! It’s a great team…for German standards. If you’re watching the NBA it’s probably a bit underwhelming but hey, you can’t say that we don’t try at all! 😉 And the good thing is that in town you’ll always find a way to get over the disappointment, particularly if you’re a beer lover.

Beer in Bamberg would deserve a whole blog series of its own, but we don’t want to exaggerate. One local specialty HAS to be pointed out though: smoked beer. While most locals do enjoy a glass of it every now and then, ratings among visitors differ about as much as the description of the flavor. Personally, I’m still convinced that the closest taste it comes to is that of smoked ham. And I’m not even feeling bad about the fact that, despite not eating meat, I actually do like the ham-beer/beer-ham. Actually, there’s different kinds of smoked beer. While the most famous one, “Schlenkerla”, is a dark and rather heavy beer, the “Spezial” with its amber color is a bit less smokey and – some say – easier to drink in larger quantities.

But, of course, never try beer on an empty stomach. While there’s very many big and small, old and new cafés and restaurants in town, if you’re looking for something traditional for the area, try “Schäuferla” (pork shoulder, mostly served with dumplings and sauerkraut or sometimes savoy cabbage) or “Bamberger Zwiebel” (a huge onion, stuffed with minced meat and cooked in beer gravy, mostly serviced with mashed potatoes).

Besides all the fabulous restaurants, it’s a big tradition in Bamberg and the surrounding to enjoy a cold drink in a “Keller”. While “Keller” literally translates to “basement”, it’s often quite the opposite – a beer garden on top of a hill and therefore on top of the rock cave where in the old times the beer was stored to keep cool during hot summers.

Now, where’s the romantic part of the story, you might wonder? Well, as every love story starts with getting to know each other, so did mine. On my second day in Bamberg, a sunny spring day in April 2016, I decided to go for a stroll around town. Beautiful baroque buildings were taking turns with half-timbered houses that gave that extra feel of the Middle Ages. Lots of people were sitting outside the numerous cafés which instantly left a holiday feeling. My stroll led me to the Green Market (a vegetable market since the 1300s) and on to the Old Town Hall. Dear Lord, that building in the middle of the water certainly is something special! I decided to walk around it and found a small bridge that gave an incredible view to the backside of the building. And there it happened – my heart started racing, I felt a bit of a heat flush and knew it: this is my new home and there’s a deep lifelong connection starting right that second. 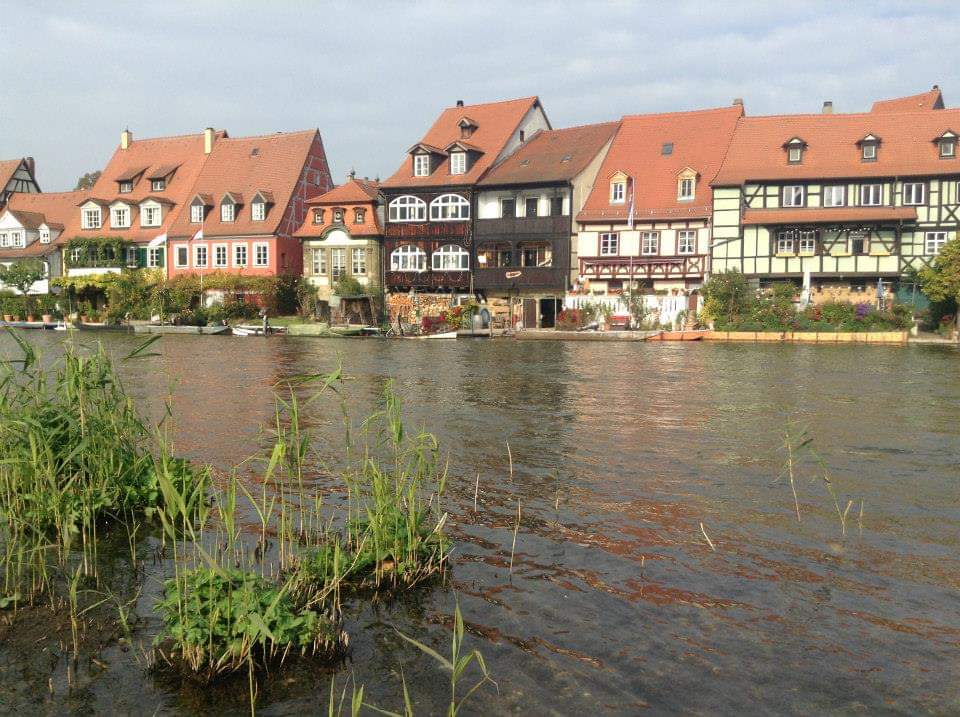 That impression didn’t change when I walked further up to the cathedral, into the beautiful Old Court Area and the rose garden of the New Residence building. Neither did it change when in the following days, I went for a walk along the river, into the “Hain” (a park area) nor when I decided to dive into the café and bar life. I had fallen in love and to this date, my feelings haven’t changed a single bit. Yeah, I know, almost a bit too emotional for a German, but what can you do when you found the love of your life? Be happy about it, cherish it and give walking tours around the town so everyone can see the city that captured your heart! 😉

Rose garden in the inner courtyard of the Neue Residenz 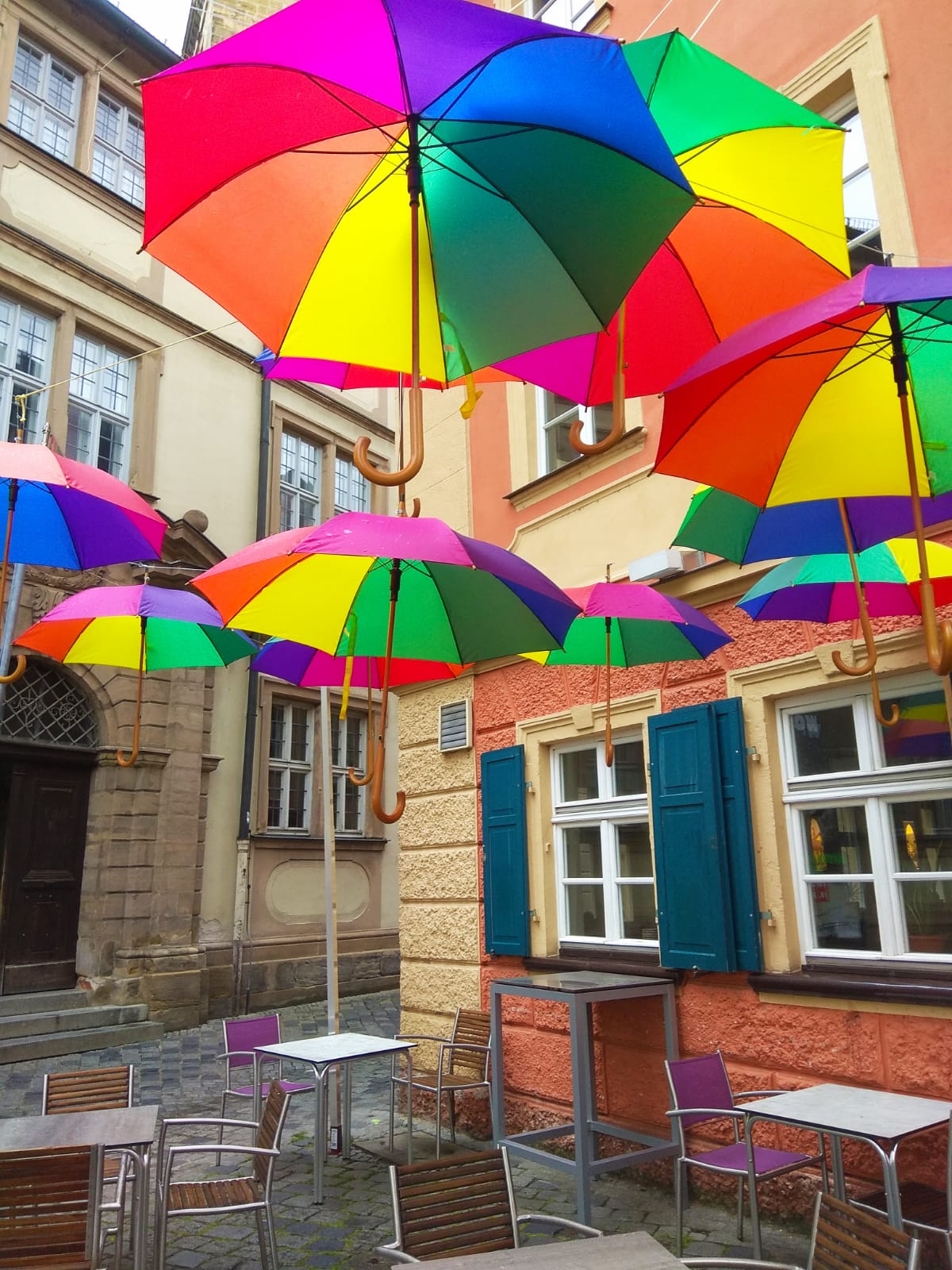 Don’t miss out on Bamberg while you’re in Germany and hopefully you’ll be able to relate to the fact that my heart has found its place. Take care of yourself!