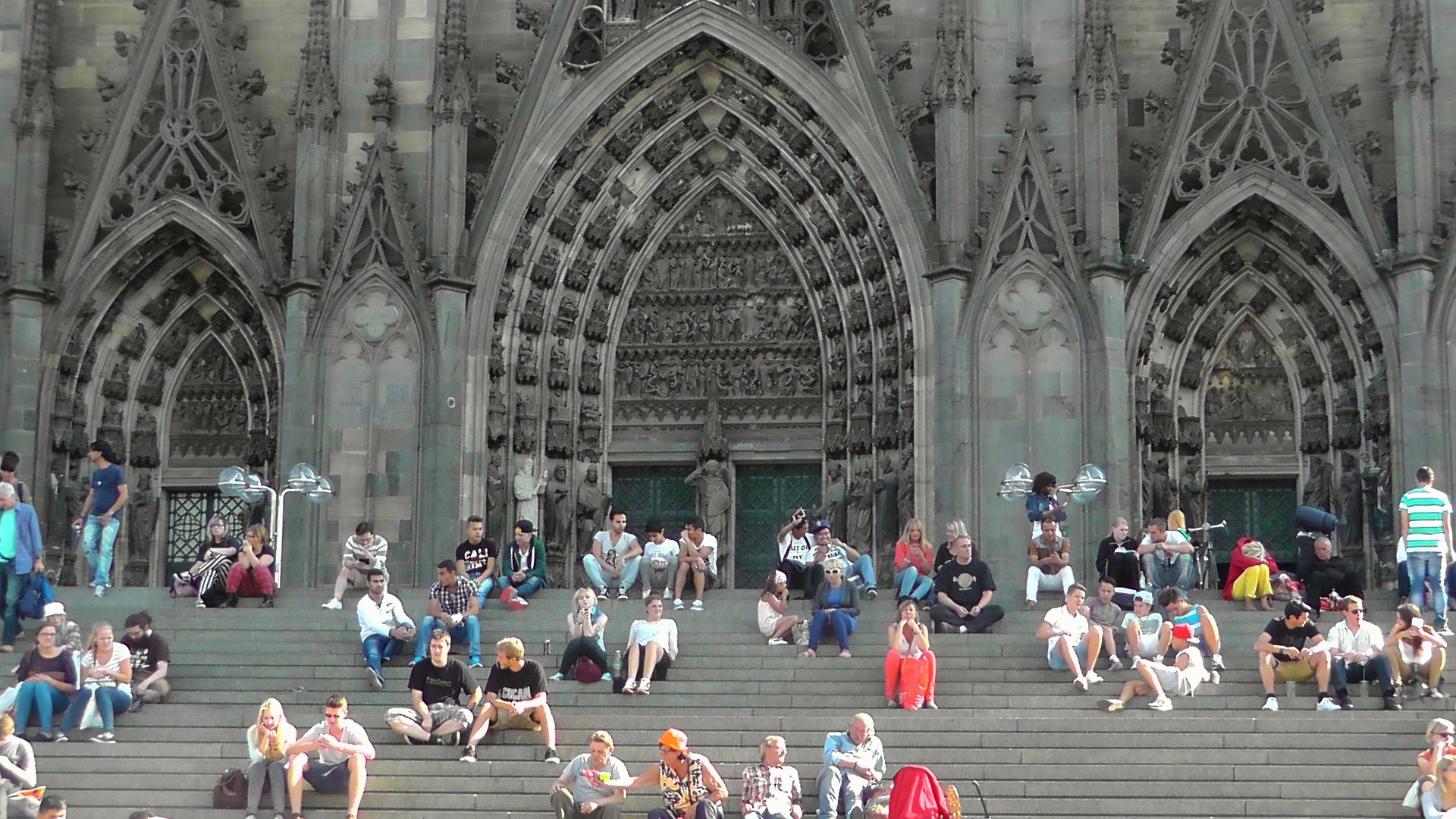 As an American in Germany I have missed large firework displays. Not that I need to see them more than once a year but every now and then it is nice to sit back and say “oooooohhhhhhh” and “aaaaaaahhhhhhhh” with the rest of the crowd. I was looking forward to this annual light show in Cologne, Germany.

We arrived on a sunny, humid day. The air had a haze but the day was bright and we were there to see the city and enjoy the evening with a light show. First off we figured out where we would be dropped off in reference to where we would be picked up. Necessary info: Check. Next, city tour. I love these tours as there is so much to Europe and all it’s bergs. Each city tour guide believes their city is the best and it is. I learn about the beginning of villages that may have been under Roman rule at the outset but went through many rulers over millennia of change along with random tidbits that include great resturants and shopping spots.

Cologne has Roman roots that date back to 50 AD and surprisingly has not changed it’s name much over the centuries. Romans named this beautiful location on the Rhine River, Colonia, and it remains Köln (Cologne). As a major shipping and trading port it has been a central player for the most of the Middle Ages and beyond. I would wager the natives still believe it remains a major player in Europe with it’s business and trade, international airport, and tourism.

Enough of the history as there are many places you can look for this information and don’t need me to rehash or reinvent the wheel. You can check out their tourism website at cologne.de as it has a wealth of info. After we left the tour early due to my aching feet and back. (Why does every city need to keep uneven cobblestones to walk upon?) We wandered through wonderful displays of the centuries of change in each marketplatz. World War II bombed most of the inner city so there is little left of the origins but what is there is sitting beside structures from the 50’s, 60’s, 70’s and on. You can be looking at a house that dates to 1200 AD beside a building from the ugly concrete era next to a glass and metal structure from this decade. The mix and diversity is wonderful as the locals embrace their history and celebrate it’s mismatched lines.

After wandering around for a while it was decided to look at the Chocolate Museum. Yes, I said Chocolate Museum. This is a child friendly look at the history and making of the world’s favorite treats. You can look at the interactive exhibits showing the botany and harvesting or a typical boat used in past years to transport the seeds. There is a small tropical garden inside that has trees over two stories high and humid as you can imagine. We looked, walked and did not stay long. Germany has enough humidity that I do not need to hang out in a tropical forest when I am sightseeing. We saw pharmacy counters from lost days when chocolate was hard to come by filled with all sorts of tins and bins that housed wonderful Willy Wonka fantasies. There are multitudes of dispensers where hungry patrons paid to experience this amazing delicacy. Sets of china arrayed in cases where once they graced the parlors of the elite. You can watch Lindt chocolates be made and see edible art among the displays. 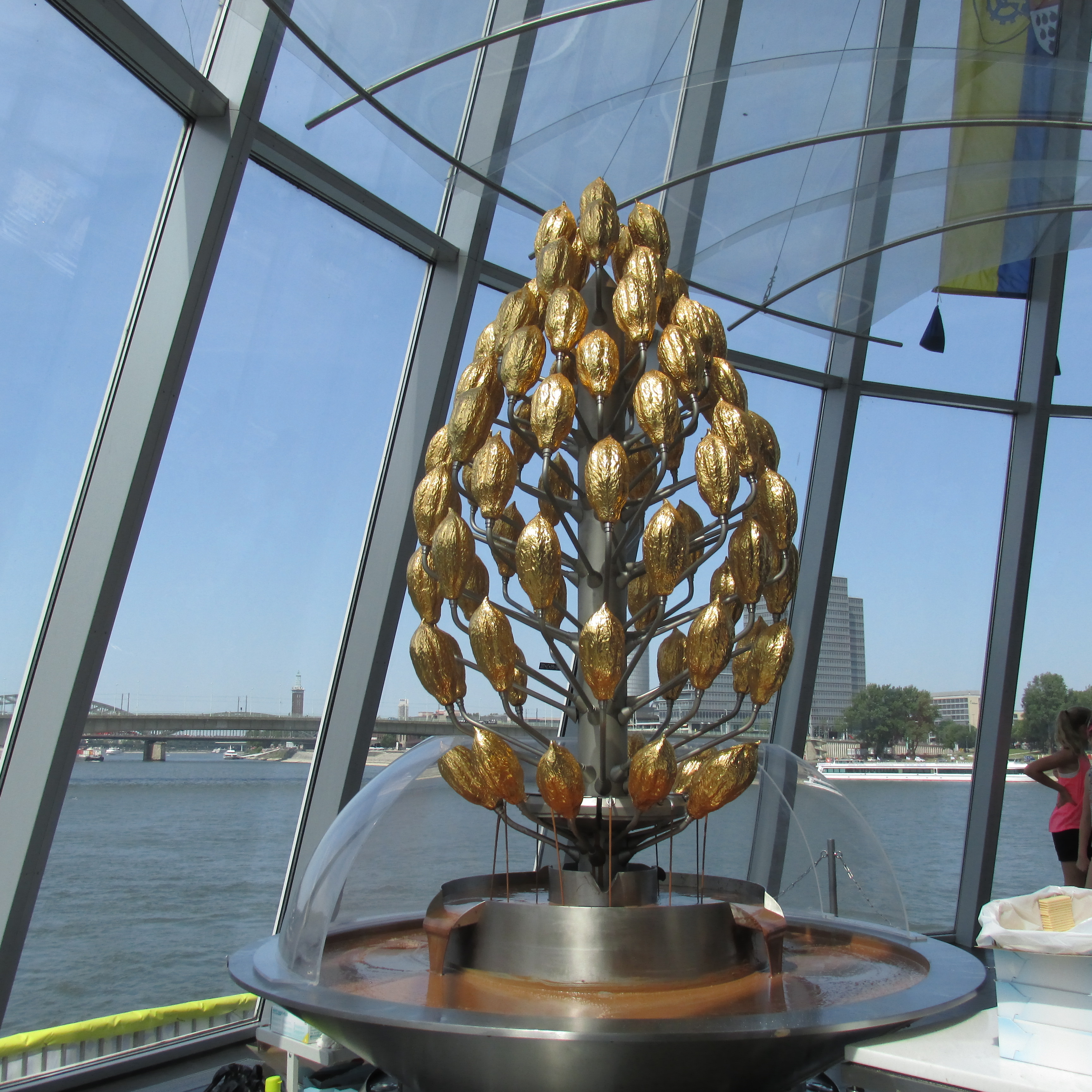 Once my chocolate fix was settled, next was the Cologne Cathedral. What was once the tallest building in the world (until the Washington Monument was erected) and used as a positioning guide for air fighters during WWII is a work of art. I could expound on this structure for hours and still not give you the sense of wonder it instills. As my dad is Catholic I took so many pictures and a video or two that it almost embarrasses me. Almost. There are flying buttresses and vaulted ceilings, gold boxes and sarcophagi. Pews of aged wood and reliefs of plaster blend in with the statues of saints and wise men. Stained glass that is 80% preWWII casts a glow and light upon all that walk down the aisles. I could have sat for hours.

The one place I did not get to see was the perfume museum. Now I do not wear perfume and think most of it stinks to high heaven but it would have been an interesting visit and I plan to see it with my next trip. You will never find me near a perfume counter anywhere in the world unless there is a clearance rack next to it but I will see the museum as it is a must to learn about the perfumer Farina and how scents have changed over time. I am a fan of advertising art and look forward to being in awe at the array of glassware and marketing campaigns.

Cologne Lights (fireworks) is a big event and many people bought tickets for prime seats. If you know me at all, you know I am frugal to a fault and will see things for free if there is an option. All open green spaces were covered with spectators starting before 2000 (8 p.m.). With seating becoming scarce I found a spot with clear view of the river and under a tree. Let the people watching begin! I love people and international people are as fun as any you will find at any amusement park or mall in the states. You have the ones that need to pull their pants up or pull that shirt down and the ones that look like they are going out on the town even though it is an outdoor event sitting on the grass. Drinking was a large part of the event and most people were enjoying the sunshine with a beer in their hand. I was in heaven.

During all this people watching I missed the rowing event but saw random rowers during the day. Next time I may need to pay better attention. At about 2230 the lighted boat parade began with small fireworks going off on the other side of the bridge. People stood, sat and lay for the event. It had just become dark and it was lovely. Boat after boat drifting buy with fairy lights on their masts and sides. It was like Christmas hit the marina. I must admit that I became confused with the fireworks that accompanied the parade. My first thought was “That’s it? That is the big event?” During this confusion I moved across to the other side of the bridge thinking the big event was over. At about the halfway point it became obvious that no one else was leaving so I sat down at the other end of the bridge to await the main event hoping for bigger and better than what had already been seen.

I was not disappointed. The light show began exactly as we had been told at 2330 but our seats were not ideal. I should have stayed under the tree. Ah well, live and learn. The high in the air lights were only half visible so off we went searching for a better view. It was found on the other side of the building blocking the view. There was still a tree in the way but it was magnificent. We could hear the music and watch the lights timed to the beat. THIS was worth the visit. Lasting a full 30 minutes it was a great show.

My takeaways are simple. Cologne is a diverse city and should be enjoyed on a sunny day. Visit the cathedral and be amazed. Don’t miss the chocolate museum and next time the perfume museum is on my city bucket list. I would recommend a wonderful day of shopping and meandering with a few ooohhhh’s and aaaaahhhh’s thrown in.